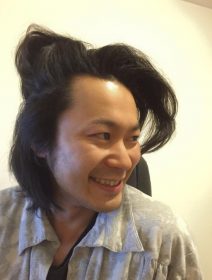 was born in Osaka, Japan. He started to dance on street
on 1997. He won Japanese national street dance competition 1 time first
praise, and 2 times third praise.

On 2011, he became freelancer and research art/installations as
communication and how to standardize for Hip-Hop street dance style to
contemporary dance style.